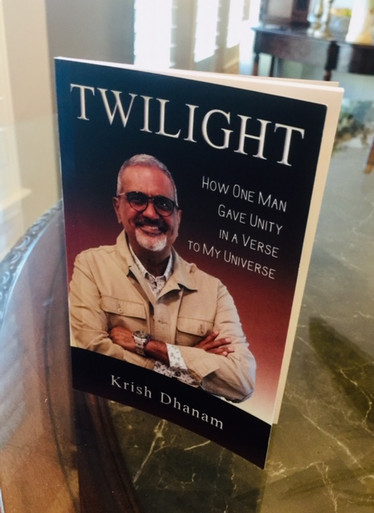 TWILIGHT: How One Man Gave Unity In A Verse To My Universe

Utilizing the essence of one verse from Scripture, author Krish Dhanam unpacks his life lessons learned under his mentor, the late great motivational genius Zig Ziglar.

Amid the backdrop of race, ethnicity, economic and social origins, and demographic privilege, Krish shares how he was shown hope for every hurt and a star for every scar.

This book, designed to be read in one sitting, will bring you back to the oneness that God intended when He created the universe.   *John 17:21

Krish Dhanam, born and educated in India, arrived in the United States with his bride, Anila, in 1986. He had an MBA and only $9.00 in his pocket. In 1990 he won a sales contest, which earned him a ticket to a seminar conducted by the legendary motivator, Zig Ziglar. Their chance encounter in 1991 led to a three-decade relationship, first as a telemarketer, then as Vice President of International Operations, and now as Global Ambassador.

Krish, one of only two executive coaches personally trained by Ziglar, has conducted seminars in over 50 countries, and throughout the U.S., with his message of hope, humor, and balance.

The Dhanams make their home in Flower Mound, Texas.