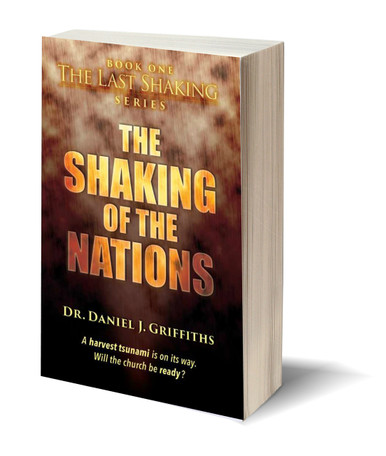 The Shaking of The Nations (PB)

(Paperback) byåÊDr. Daniel J. Griffiths
A church member came up to me after a church service and said in the course of our conversation ÛÏI hope I never live to see the last days of the church. I would like to just skip all the problems that generation will face.Û Many Church members when faced with the biblical subject of the last days feel the same way. To many churches have failed to prepare GodÛªs People for the end times. They have allowed fear and not faith to dominate their thinking or have taught them to believe they will never have to face such troubling times. Such preaching is failing not only the church but God himself.
Much of the church is not ready for GodÛªs last shaking. But God does not have a ÛÏPlan B.Û God is going to get his church ready. Already He is raising up ÛÏprophetic voicesÛ that will awaken his church. This is the challenge and calling God has given me and church leaders around the world - ÛÏget my people ready.Û The greatest days of the church are ahead and will reveal some of the greatest heroes of the church. As the Prophet Haggai predicted - God is going to ÛÏshake once again the heavens and the earthÛ to cause the nations to realize that the only stability in life is found in the Kingdom of God. The Lord is not going to allow 50% of the worldÛªs population to go quietly into hell. Scripture is clear that God is going to become ÛÏaudaciousÛ in manifesting the life and power of the Kingdom of God. He will raise up miraculous witnesses on prime time TV that even Antichrist can not touch. He will assign angels to publicly preach the gospel to every village and city in the world. Such audacious events will form the greatest climatic harvest wave in Church history.
It is true that this amazing harvest will be accompanied by the worst persecution the church will ever experience. We must face this fact that there will be a generation of the church that will face this great test and it will be sooner rather than later. Yet Jesus has instructed us how to face this difficult time with faith and not fear. Such a season of ÛÏredemptive sufferingÛ will produce the most glorious and victorious church ever seen in church history. This is the first book in a series called the LAST SHAKING. Book one will deal with the biblical truth of the great climatic harvest wave the church must prepare for. Book two will deal with the the coming ÛÏElijah RevivalÛ - the greatest worldwide revival the church will have ever seen. Book three will deal with a study of some of the most amazing apostolic strategies that can quickly and effectively disciple this climatic harvest wave. It will also deal with the essential need of ÛÏchurch unityÛ and the forming of end time ÛÏArksÛ to gather the harvest into. This is a must read book to help adjust the thinking of church leadership towards the work of the church in the end times. God is ready to shake the nations while manifesting a life giving unshakable church. Satan will do his worst but God will do his best.